The Grads In Games Awards recognise the people, studios and institutions that have made a real impact in improving the links between the games industry and education.

The awards highlight the academics, universities, colleges & courses that are going the extra mile, not just by educating, but actively helping students make the leap to becoming professional game developers.

We also recognise the students and projects that are already firmly on this path, producing exemplary work and helping those around them to achieve more.

The Grads In Games Awards

Nominate for the Grads In Games Awards now!

The 2022 Award Categories in Detail

Eligibility : Individual academics, lecturers & tutors who have contributed to games or games-related courses during the eligibility period.
Team/group nominations may also be considered in place of individual nominations.

Lecturers,course leaders & academics who have demonstrated a positive impact with their students over the past 12 months. We want to showcase the academics who are doing the most to help students, giving them the best opportunities to graduate straight into a games industry role.

These are the academics that go beyond just the lectures, are often excellent student mentors, organise industry events and speakers, and can show wide-ranging beneficial results of their work.

Eligibility : FE or HE providers who have operated courses in games or games-related areas during the eligibility period.

Universities, colleges and academic institutions that have demonstrated a real, positive impact with their students over the past 12 months. We want to showcase the departments and courses that are doing the most to help students, giving them the best opportunities to graduate straight into a games industry role, including high achievements in our Search For A Star challenges.

We want to recognise the institutions who actively implement initiatives or take positive actions to help students gain employment within the games industry.

Current games students who have demonstrated a positive impact with their fellow students over the past 12 months. We want to showcase the students who are the doing the most to support, progress and inspire their peers through a range of pro-active and supportive activities.

These are the students that actively strive to learn more, are happy to help and share their knowledge, who are always trying new things and new approaches, and who probably already have an impressive portfolio of projects & activities both as part of coursework & as extra-curricular work.

Eligibility : Games released (in any form) during the eligibility period, created by individuals or teams studying undergraduate or post-graduate games or games-related courses.
Games do not need to have been created as part of coursework or as an academic project.

Student games projects published within the past 12 months, that demonstrate a strong talent and aptitude from its developer(s). These can be an individual project or a group project, either as part of student coursework or produced independently and extra-curricular. We want to showcase the projects that go above and beyond expectations & highlight students making excellent preparation for life as a professional developer.

Eligibility: Universities and games industry studios.
Actively collaborative works between universities/students and studios within the past 12 months. This can be studio oversight or initiation of a course module, an individual project or a group project as part of an academic course. We want to showcase universities and studios that demonstrate strong interaction and build direct connections between courses and the games industry.

Examples include:
Studio staff delivering talks/workshops/sessions with a university on an ongoing basis
Course content developed based on studio feedback or assistance
Projects with briefs provided by a games studio or students receive live game briefs.
Active studio involvement in the development of a game prototype.
Projects that are substantially supported by games studios through training and mentorship.

Eligibility: Individuals who are employed in the games industry.

Games industry professionals that demonstrate a positive and pro-active approach to supporting students and graduates. We want to highlight those individuals who are always looking for opportunities to help and give back alongside their day job.

This can include presenting talks at universities and colleges, actively mentoring students, providing portfolio reviews and advice, attending student expo days and fairs, producing educational content. These are all activities we want to highlight in those advocates from the games industry who go above and beyond their day job to help the next generation of the games industry.

Eligibility : Studios and companies within the games industry who have hired interns, graduate or junior level staff during the eligibility period.

Games studios & companies that have demonstrated a positive and pro-active approach in hiring and supporting graduates & interns over the past 12 months. We want to showcase the studios that are doing the most to help the next generation of games developers, working towards a more sustainable future for the games industry.

These are the companies who take an active role in mentoring and supporting their junior staff, training them not just for their current role, but preparing them for their career ahead in games.

Eligibility : Individuals who have been employed within the games industry for 2 years or less, in graduate, junior and/or intern roles.

Recent graduates and junior staff that have exceeded expectations in a studio role. We want to showcase the staff that are making their first steps in the industry but are already having a hugely positive impact, not just within your studio but also towards the industry as a whole.

From graduates quickly becoming an essential and integral member of their team, to those already developing leadership potential, and to those in early stages of becoming key figures at industry events and outreach initiatives, we want to recognise the burgeoning efforts of these future games superstars & the benefits that graduate staff can bring to a team.

Eligibility : Any current students or academics in games education, or people working in game development.

Individuals who have made notable efforts to help people from under-represented groups access and thrive in entry-level roles in the games industry. This can include but is not limited to actions advancing inclusivity across gender identity, sexuality, class, ethnicity, physical ability, and neurodiversity. Whether it's a student or academic supporting those currently studying, or an individual from within the industry helping to provide more accessible environments and routes into employment, we want to recognise the efforts made to improve inclusivity for those starting their journey into games.

Students who have created projects showing notable technical skill and accomplishment in video games development. We want to showcase students in any discipline that are creating innovative and original projects, showing they have a deep understanding of the needs of game developers. Examples can include building their own engines, creating complex runtime shaders/VFX, developing custom tools, workflow systems etc.

Nominations for the 2022 awards will close at midnight on the 6th March 2022.

2022 shortlists & awards reveal will take place across March and April 2022.

Send us your award nominations!

The Grads In Games Awards 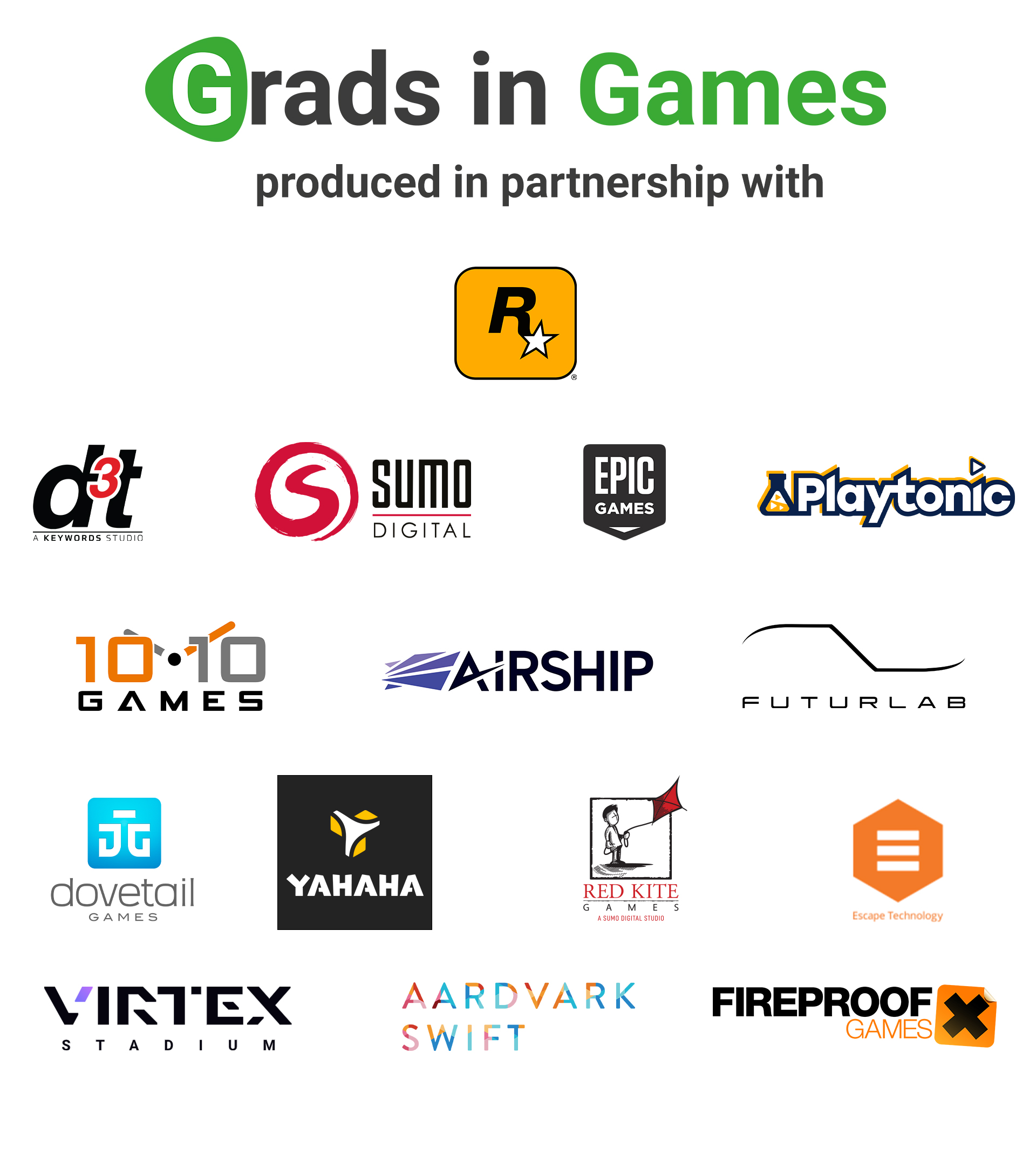