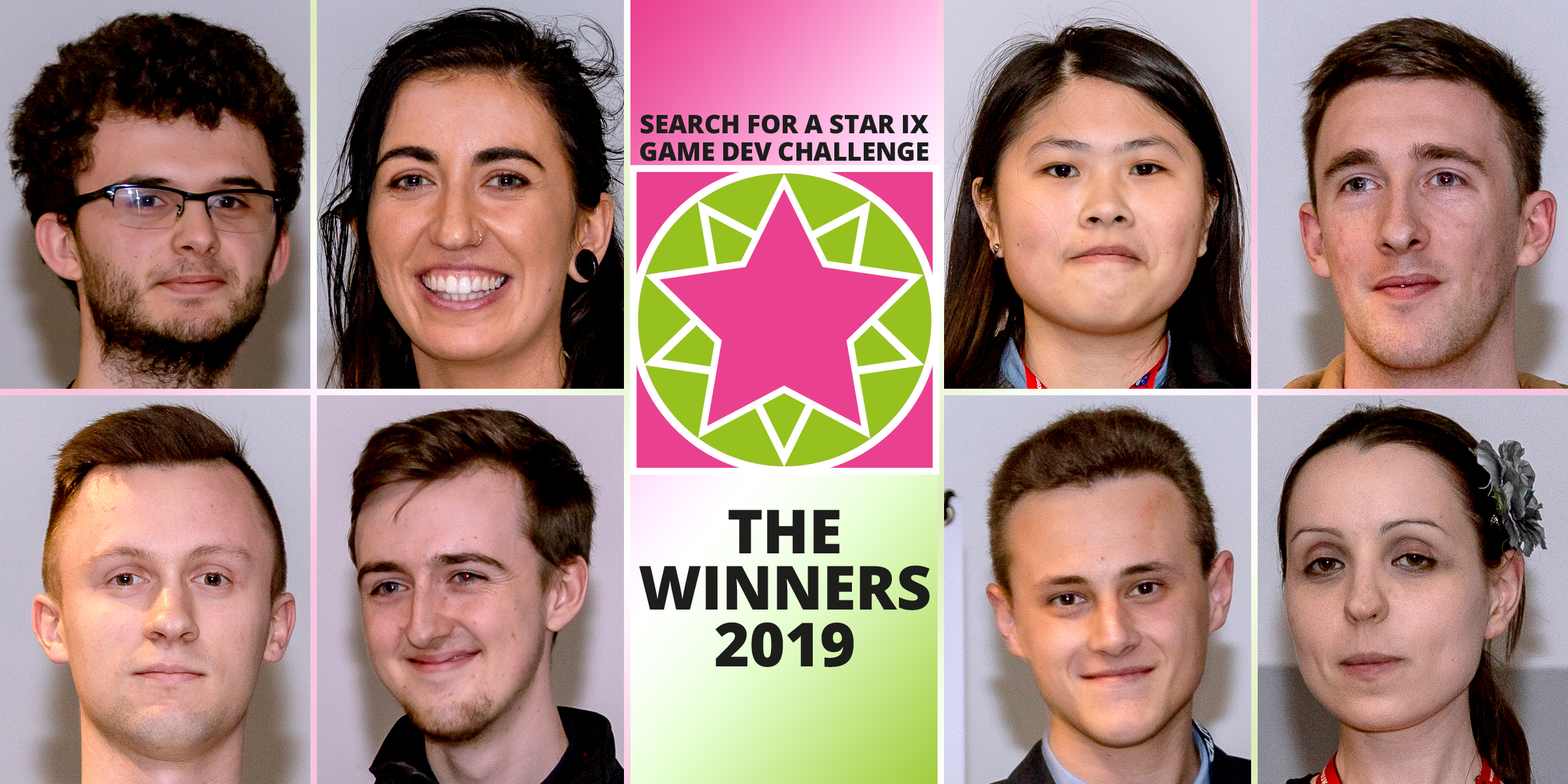 Search For A Star & Sumo Digital Rising Star have come to a close, and the 2019 winners have been revealed!

It’s been a fantastic year for Search For A Star and we’re proud of everyone who made it through to the 2019 final interviews. Several of the categories were packed with such great finalists that there were some really tough decisions for our judges to make. From projects that were already at a professional level, through to portfolios of amazing potential, this year’s finalists are some of the best we’ve ever had in Search For A Star. We’re also very proud to see some well deserved wins from previous Rising Star finalists, including one student coming back to win their second award!

We created the challenges as a way to highlight to games studios some of the exceptionally talented students across the UK and Europe, and that’s certainly been the case this year! Over the past nine years, we’ve helped change the way that games studios view people coming out of university and create a more positive attitude towards graduate programmers, artists, animators and VFX artists. Increasingly, studios are welcoming the fresh perspectives, abilities and enthusiasm that graduates can bring.

We hope that by continuing to encourage communication between universities and the games industry, and by providing Search For A Star as a platform for students to show their skills, that we can keep improving links and keep the games industry growing!

Thank you to all of the assessors who have helped everyone get to this stage. Their experience and expertise throughout Stage 1 & 2 of the challenges has been invaluable in providing feedback and highlighting those with the potential to get through to the final stage. We’d also like to give a massive thanks to the Grads In Games partners and supporters who have made all of this possible. Their support and belief in the initiative, across both the Search For A Star game dev challenges and our Get In The Game student careers events, has really shown the importance of running activities like this. Huge thanks to Epic Games, Sumo Digital, nDreams, Boss Alien, TT Odyssey, d3t, Red Kite Games, Furious Bee, Firesprite, First Touch Games, Sheffield Hallam University & the National Videogame Museum.

And so… our Search For A Star (final year and masters students) & Sumo Digital Rising Star (students not yet in final year) winners for 2019:

Search For A Star
Games Programming

After getting one of the only 100% scores in the Stage 1 C++ test and high scores across the Stage 2 gamedev project, Nick was already in a great place going in to the final interview stage, especially after reaching the finals in Rising Star ’17. The judges were impressed with Nick’s breadth and depth of technical knowledge, as well as his ability to consider and talk about this to an interview panel. With his Stage 2 game, Nick attempted an interesting, technical and ambitious process that showed the judges his high calibre as a games developer and programmer. Nick answered every technical question strongly, was reflective and self-critical and showed a great ability to problem-solve on the spot to reach good answers, earning him the title of this year’s Search For A Star winner in Games Programming!

Tahar showed the judges his confidence in his strengths as a coder while acknowledging there’s always more to learn. In the interview, Tahar gave solid, strong and timely responses, with his self-awareness and understanding on personal development making him stand out to the judges. He responded well to the pressure of the interview and showed willingness to talk through his thought process to show the judges how his ideas came to fruition.

Search For A Star
Environment Art

Last years’ Rising Star winner has triumphantly returned to win the Search For A Star award in environment art! In addition to his incredible artistic talent, the judges were particularly impressed with Jimmy’s organisational skills, complimenting his logical and efficient development process. The restricted time-frame he imposed on himself actually worked in his favour and meant that his project was very focused, tightly controlled and with considered decisions.

Reece’s final environment project was beautifully crafted with individual elements that were interesting and technically advanced. The interview Reece gave was confident and aware of his own shortfalls, additionally he took criticism well which showed a maturity that would fit in well in a studio environment. The judges noted that it would be a pleasure to work alongside Reece in a studio, a compliment that was shared with the other finalists too.

Search For A Star
Character Art

Having previously reached the Rising Star final in 2017, Ellie’s been hard at work applying her knowledge and developing her skills. Ellie’s process of envisioning and creating a character from scratch showed how talented she was as a character artist & that she was confidently working at a very high level. Using an original concept it was clear to the judges that she had thought about her character from the ground up, with that holistic view of the character creation process making her really stand out. Her interview showed how proactive and passionate she is as a person and her willingness to help people – the judges could all envision Ellie as both an excellent artist and a valued mentor to junior artists in the future.

Melissa showed one of the strongest character projects of the whole challenge, developing a nuanced and detailed character, complimented by an excellent portfolio presentation. She showed a great artistry, strong potential for the games industry and a novel approach to presenting in an interesting way that really made her stand out to the judges. Her style from concept all the way to execution was impressive & made her a worthy winner of the Rising Star award.

Search For A Star
Games VFX

With hugely impressive portfolio & high scoring Stage 2 project, Kidman showed a lot of strong work with many great pieces across artistic and technical areas. The judges praised the excellent quality of the VFX work on show, great creative use of colour in her work as well as a keen eye for detail. Her amazing skills shows great potential as a VFX artist for the games industry.

The Rising Star finalist took the win this year! Maciej’s showreel had great variety, perfectly highlighted his skills and really showed just how much potential he has as an Animator. Impressing the judges with his ability to understand his own limitations and willingness to work with others to help improve his knowledge, Maciej’s humble attitude and desire to learn came through in his interview. With his impressive portfolio and positive attitude, the judges were pleased to announce him as this years winner.

A very well-deserved congratulations to everyone!

Thank you once again to everyone who took part in the Search For A Star process throughout the year, including all of our finalists, our final stage judges, project assessors and industry partners – you make the day what it is & we couldn’t do it without you!