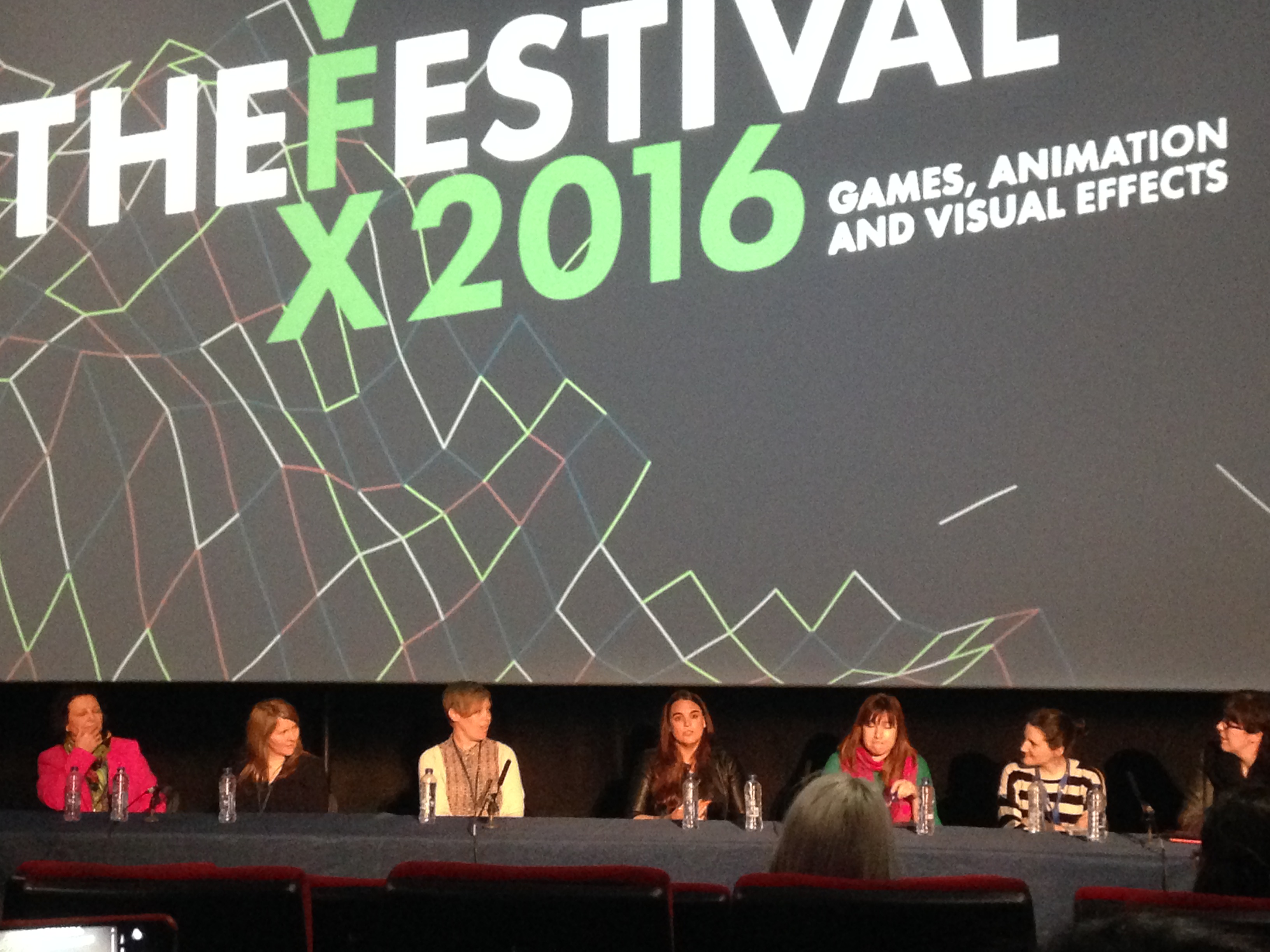 Women in Games, NextGen Skills Academy and The Third Floor talk about Women in the Industry at VFX Festival

When Aardvark Swift weren’t busy giving career advice at VFX Festival in London, we were eagerly listening to what other colleagues in the industry had to say!

The Women in Industry panel featured women from all areas of VFX, Animation and Games, and got everyone discussing the issues women often face in these industries, from having children to the “Halo Effect” of women in senior positions.

The Panel (from left to right on above photo).

Armed with facts and figures, Gina Jackson reported that despite the audience for VFX, Animation and Games industries being about 50/50 in terms of gender, the percentage of women currently working in games is at 14%, although it has previously had highs of 20% and lows of 6%. Everyone was quick to try and pinpoint the reason behind these figures, with Tessa Mapp noting how men have always been encouraged to study computer science degrees in the past, leading to more men filling the senior roles in companies.

[pullquote align=”left” cite=”Michelle Blok” link=”” color=”” class=”” size=””] “Companies need to think about how they [encourage women], or they will miss out on good talent.”[/pullquote]

Even when women do bag senior titles in the industry, it’s certainly not an easy task. As Michelle Blok says, “Women have had to work hard to reach these positions against the boy’s club.” Clare Norman went further to suggest that even when women are in senior positions in the industry, they tend to be quite masculine in their behaviour; as though this is an essential persona that they must adopt to keep up with their male peers. Gina also reported that in general, women tend to take redundancy quicker than men, leading to a loss of the “halo effect” created through the employment of women in senior positions. As other women lose their senior peers, it can be discouraging for women to fill these vacancies. Michelle brought up the contrast between companies that actively encouraged women in the industry and those that don’t. She says that “Companies need to think about how they manage it, or they will miss out on good talent.”

Both Women in Games and NextGen Skills Academy offer mentorship schemes to support women in the industry. Talking about Women in Games’ internal mentoring scheme, which offer women one to one mentoring, Jenny Richard Saunders says that “We can all benefit in our careers” and that “If you can find someone that you admire, it’s a huge benefit.” So with the help of their mentors, women are made to feel supported in their career. NextGen Skills Academy also offer mentoring, with Gina telling us that she often found that it’s the mentors who gain more from the mentor/mentee relationship than the mentee.

Labelled a “taboo” subject by Tessa, the issue of women and maternity was soon raised by a member of the audience. A mother of children herself who works part-time, Tessa admitted that she wondered if the topic would be brought up. She noted how although you get a lot of family-friendly companies in the industry, it can often be a lot harder for freelancers, who could struggle to get regular childcare support.

One thing the panel agreed on was the importance of maintaining a healthy work-life balance (something that’s of course just as essential for men in the workplace). Like Tessa, Gina chooses to work part-time to achieve a good work-life balance. With the industry being as competitive as it is, many fall into the trap of working long hours in order to get ahead or just keep up with their peers. Gina’s advice to women in the industry is “Don’t put off your life. Find other people who will support you.” It’s for this reason that companies like NextGen Skills offer taster sessions and mentoring schemes, to support other people in the industry and help them achieve a healthy work-life balance.

A final question raised by the audience asked the panel how they would advise succeeding in the industry without the repercussions of sexism and, in extreme cases, harassment. Jenny responded frankly that for women, there will always be repercussions, however this shouldn’t discourage them. If they’re passionate about the industry and what they do, then they must stand up for themselves, whatever the consequences. This is why programmes and mentoring schemes provided by Women in Games and NextGen Skills are being developed; giving women more confidence to be able to deal with these problems.

The Women in Industry panel was insightful and inspiring for all women currently working in the industry or looking to get into it. The diverse range of voices on the panel showed that whatever your age or ethnicity, you’re all working towards the same goal. As summarised by Gina, “If we do the same things, then we’re going to make the same products. Funny that isn’t it?”