Yan Knoop: Introducing our Search for a Star 2016 Code Winner 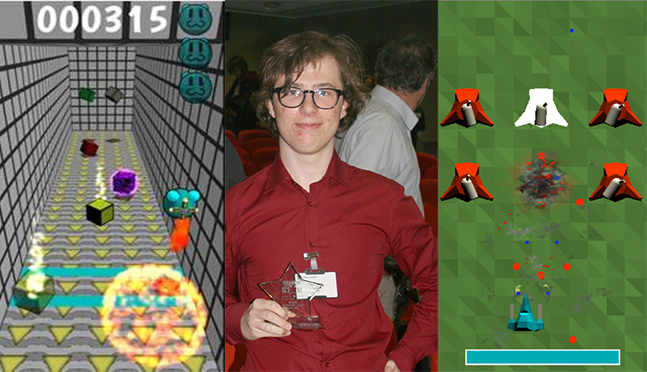 After winning the Rising Star competition last year, Yan Knoop has now become the second person ever to win Search for a Star for the second year in a row. We catch up with Yan to find out more about his competition experience and his aspirations for the future.

Rising Star 2015 saw Yan Knoop score high marks for his game ‘Block Dodger’ which got him through to the finals day event at Microsoft. His impressive interview performance crowned him the Rising Star winner, and bagged him an exclusive internship with Rising Star sponsor Sumo Digital. During his internship at the Sumo headquarters in Sheffield, Yan got to work on Disney Infinity 3.0 for Apple TV with the team.

Yan returned to the competition, scoring high marks once again for his shooter game ‘Air Guns’. And on finals day at Microsoft in Reading on 4th April, Yan took home the title of Search for a Star winner 2016 after impressing the panel of seven industry-expert judges!

With two trophies under his belt, we were eager to catch up with the NHTV student to hear his thoughts.

When did you first know that you wanted to get into games?

I have been playing games since I was about six, and games have always had a very strong attraction for me. After a while I also became interested in breaking some of the games I was playing, by using glitches or cheats. This gave me a very enticing peek behind the curtains. However, aside from some half-hearted GameMaker projects, I never even considered making games for a living. This changed when I found out about dedicated game development courses. After that, I could not really think of anything better suited for me.

Were there any particular games that inspired the games you made for the competitions?

The game I made last year was mainly based on a flash game called Dodge. It’s a game with very simple enemies. Each enemy by itself is not much of a threat, but when they are combined in certain ways, the levels get really intense. Similarly, my enemies have very simple patterns which combine for greater difficulty. For this year’s competition, I decided to make a fairly straight-forward scrolling shooter. I spent quite a while getting the feedback to feel good, and I used some of what I like in Vlambeer’s style (Nuclear Throne) for that. This meant lots of explosions, screen-shake, smoke and sound effects.

[pullquote align=”left” cite=”” link=”” color=”” class=”” size=””]The competition is a nice way to get a reflection on your progress as a developer.[/pullquote]

What have you enjoyed most about taking part in both Rising Star & Search for a Star?

Getting out there and comparing myself and my education to other students. Within a university, there can be a tendency to only match yourself to your peers there. A competition like this helps to connect with students from different places. The second round is also a nice side-project. Focusing on a two-week game project was a nice way to procrastinate regular coursework, something like an extended game jam (though catching up with courses afterwards was less fun!).

Why would you recommend the competition to other students?

It’s a nice way to get a reflection on your progress as a developer. Depending on where you get with it, you will know which areas of your skill set to improve upon. If you do get through to one of the later stages and the finals, you will have a good way into UK game companies. Also, the first round only takes 90 minutes! It’s not that difficult to fit the competition into your regular schedule.

What are your aspirations for the future?

I want to get really good at game play programming. Over the past few years I have found that game play is my preferred niche and I have tried to specialize in that. I especially love motion and movement systems. Of course, since I am only a student, there are so many different genres that I have not even tried yet! I would love to build up the knowledge and intuition to work on all of them.

Thank you to Yan for his time, and congratulations on the big win!