Bright and early we left Yorkshire through the beautiful Sherwood Forest to start our gloriously sunny and exciting day at Brains Eden 2015. Brains Eden is in its 6th year and is produced by Creative Front Cambridgeshire.

Brains Eden is a massive game jam participated in by 150 students from around the globe, giving them 48 hours to make original games based around a surprise theme. This years theme was displacement and we were there on the Monday to be part of the final day.

We were delighted to be asked to be two of the industry judges marking the final games. The students had been incredibly successful in such a short amount of time. It was great to see unique ideas and concepts being implemented.
The games where all of an incredibly high, publishable standard so choosing a favourite was tough.
After a morning of gaming we were treated to a fantastic buffet and were filled with energy for the afternoon speed surgery sessions! 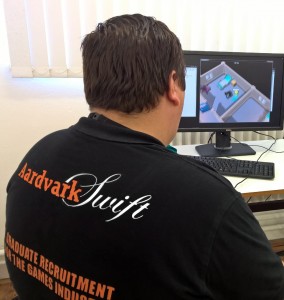 he speed surgery consisted of 10 minute CV and portfolio advice sessions given by Mark Hope – Graduate Recruiter. With no gaps it was hectic and productive and Mark was able to share a great deal of advice on employability.

The end of the day and the results are in! The University of the West of England have had a fantastic day. Their team Red Fox R, win the Best Game and best mobile game prizes. The most difficult decision was awarding the prize of Best Jammer. The prize of a six-month paid freelance contract at Guerrilla Games Cambridge went to Timo Van Hugten, a student attending NHTV in Holland.
It was fantastic to see so many Universities and companies in one place coming together to help inspire the next generation of game devs. Now time for the long drive back to Sheffield until we return for Brains Eden 2016.
Pictured below, Andrew Brammall from Unity announces Red Fox R as the winners of the Best Game prize.