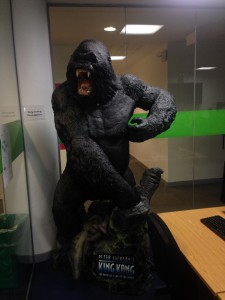 Day 4 of the Get in the Game careers talk tour saw us return to English soil. With a hearty full English breakfast to set us up for the day we headed off just down the road to Northumbria University.

We were met by Senior Lecturer Chris Rook and taken to the awesome Games Lab that they have here. With PlayStation 3’s and Xbox 360’s scattered around for students to use for lessons, a great set of students were keenly waiting for us.

After a few technical issues the talk was brilliant and all students were impressed with both sets of speakers.

We departed Northumbria and made the short journey to Newcastle University. We got in front of around 40 top quality masters students who were all strong C++ coders and keen gamers.

With the Newcastle Universities over, we then set off to Middlesborough for our final talk of the day at Teesside University. Seen by studios of one of the great universities in the UK, we were really looking forward to this particular talk.

We were joined for this talk by Rebecca Askham from Sumo Digital, here to check out the talk before Sumo join us later on in the tour.

The talk at Teesside was the biggest of 2014 with over 50 students attending. In a lecture theatre that looked more like a cinema screen than a place to learn. Mark and the guys from Boss Alien once again gave a great talk. It was also great to see so much interest in the PES League University Championships that Konami is setting up.

Once the talk had finished, we headed over to The Dickens inn, for the NE/W Start, Game Bridge event.

With Aardvark Swift, Microsoft, Sumo Digital and Boss Alien sponsoring the event, and the hard work from the Game Bridge team putting everything together, this resulted in an attendance of over 150 people. Everyone enjoyed a mixture of local indie games (including Boneloaf‘s ever popular Gang Beasts), the free bar and the opportunity to meet a lot of people from the industry offering out career advice.

It was nice to see familiar faces once again, such as Andreas from Nose Bleed Interactive, Michael from Boneloaf and the Falcus brothers from Hippo Entertainment.

The night was a huge success, with lots of contacts shared with students wanting to make that first step to Get in the Game.

Leaving in good spirits, and making our way back to the guest house to rest up. Preparing for the final day of the first leg of the Get in the Game Tour where we’ll be visiting Durham University and the University of Sunderland.