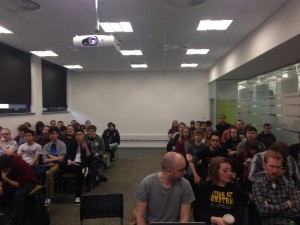 Day 3 of our Get in the Game Careers Talk Tour was the final day in lovely Scotland. Also worth noting that it was the day we got a real taste of Scotland, with a haggis served on our cooked Scottish breakfast.

Leaving Kinross behind, we made the short journey to the lovely city of Dundee for our first talk of the day. This was to be held at Abertay University. One of the top gaming institutions in the world.

There was a packed line up for the talk at Abertay, and all were congregated in the union coffee bar to intake their morning caffeine fix.

It was great that 4 out of the 6 speakers had attended Abertay. That really shows the great work that is going on at this university. The talk was presented to a full room of intrigued and keen masters and undergraduate students.

This is where the Microsoft representatives left us as Aardvark Swift and Boss Alien set off for the second talk of the day at the University of St Andrews. A very traditional university with a highly academic Computer Science course.

Making the journey across the Tay road bridge and onwards to the historic town of St Andrews. We knew we had arrived when we were greeted by the Old Course Hotel, at the world renowned St Andrews golf course.

Waiting for us was Kenneth Mason from Day one to represent Microsoft on the Scottish talks for the final time. He was here to speak about the Imagine Cup and how to become a Windows Games Ambassador.

The talk at St Andrews was presented to only a small group of students, but all were really keen to learn how to make it in the Games Industry.

This is where the tour ended in Scotland, and it’s been a great 3 days where we have seen some great sights and more importantly, got in front of a large number of students to show how we can help them in their pursuit for a career in games.

The Aardvark team and the guys from Boss Alien are now making the long 3 and 1/2 hour journey to Newcastle. Where we will rest up and prepare for the penultimate day of the first leg. Tomorrow we will be visiting Northumbria, Newcastle and Teesside before attending the Gamebridge NE/W networking event for final-year students, games industry graduates and games professionals. Make sure you come along by getting your ticket at https://www.eventbrite.co.uk/e/start-new-game-2014-tickets-13133766449?aff=eorg.

Come back tomorrow to find out how it all went down on day 4.