November 3, 2014 Mark Hope 0
Posted in Get In The Game, Tour DiaryDead Trigger 2 Get In The Game 2014 Josh Naylor Madfinger Games Unity University of Bradford WebGl 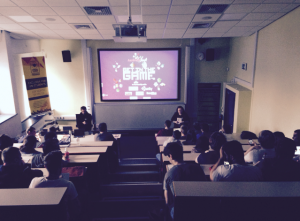 We’ve reached the final day of our second week of the talks. It may not have been as stressful as the first leg but it was just as rewarding. Today we are making the short trip from home to Bradford for the final talk of the week. This would be the 7th of the week and the 21st of the tour so far.

As the talk was in the afternoon we went back in the office for a couple of hours to say hi to all the guys. It was nice seeing them all after a couple of weeks out of the office. Leaving around lunch time to make the short trip to Bradford, we had high hopes for a good turn out from the students of the University of Bradford.

It’s always great to visit the different parts of Yorkshire, to know how similar you are but there are so many differences. I think the best moment of the day was seeing a horse and cart going round the streets of Bradford collecting scrap metal.

Also on our journey to the university we saw Valley Parade, home of Bradford City AFC. It’s great to see another football stadium, and one with so much history, including the infamous Bradford fire.

We arrived at Bradford in plenty of time and met up with our guest speakers for the day, Josh Naylor from Unity. He was here to present Unity 5 and all the new upgrades including a cool demo showing the use of WebGL with Madfinger Games‘ Dead Trigger 2.

We had a great turnout at Bradford as we had hoped, with over 40 students attending to learn how to ‘Get in the Game’. It was nice to meet the students and lecturers of Bradford who run a range of really good courses here. It was a great way to end the week!

We are now 21 universities down and only have 56 to go.

Next week we are off to the Midlands to visit another 10 universities. Make sure you come along if you attend one of the following: Nottingham Trent, Derby, Staffordshire, Keele, Gamercamp, Northampton, Wolverhampton, Coventry, De Montfort or Loughborough.