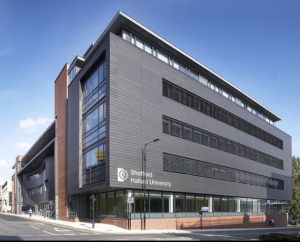 Day 7 of the Get in the Game Careers Talks Tour saw us return home to Yorkshire to visit some of our more local universities.

The first talk was our most local, Sheffield Hallam University. Only being a stones throw away it meant that there was a small lie in allowed that morning. However, still a bright and early start for the day. We arrived in good time at the Cantor Building where the talk was being presented. Here we met all our guest speakers for the talk, 5 in total. We met:

– Dave and Michael from Boss Alien,

The first event of the day was a success and all the different talks complemented each other, which was great! The students who attended are all on an excellent games courses run by Jacob Habgood. We were also very lucky to get to view their new PS4 lab that they are currently using as part of there studies.

This is where we said goodbye to Matt and Topher and ourselves, Boss Alien and Unity would be making the trip up to Hull for the second and final talk of the day. Just before we set off however we managed to squeeze a quick bite to eat at Street Food Chef for a nice bit of spice to give us a kick for the final talk. We jumped on the M18 and onwards to Hull we went.

We arrived at the University of Hull with plenty of time to spare so we could have a coffee before hand and also meet two new speakers from Microsoft. For the Hull talk we were joined by Adam Boyne and Isaac Surfraz, who are both Windows Games Ambassadors and came to talk about the Imagine Cup. We were also joined by Jafar Soltani, the Senior Software Engineer at Rare.

Ourselves and the guest speakers then met the very eccentric and always joyful lecturer, Tony Taylor. He directed us to the venue and when we arrived we were met by a bulging crowd of enthusiastic students. As we set up the equipment, more students were arriving which gave us a bumper crowd and was a great start to the final presentation.

All the guest speakers for the day were great and the students really took to what they were saying. Especially Josh Naylor who was here to represent Unity. He was presenting the new features of Unity 5. Showing the power that their new engine possesses and also how it can output WebGL demos.

With the talks over for the day, we made the short journey to Huddersfield to drop off the Boss Alien gang and head home to prepare for the next day. Only one talk tomorrow, however its going to be a good one at the University of Huddersfield.