Mark Hope, Graduate Talent Manager for Aardvark Swift Recruitment, delivers the first tour diary of the 2014 Get In The Game tour, providing industry supported guidance and advice to give students a better chance at getting into the games industry. 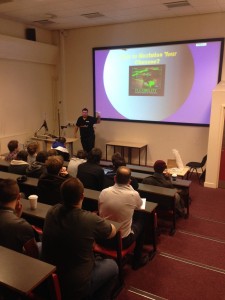 What a great first day it’s been to start the 2014 Get in the Game Career Talks Tour! We had a bright and early start to the day with the University of the West of Scotland up first. Followed by Glasgow Caledonian University, and ending the day at the Glasgow School of Art. Over 30 students attended the morning events to watch me deliver a talk on how to make it in the games industry.

En route to the final talk we took a minute to take a quick snap of Ibrox Stadium, home of Glasgow Rangers. Impressive traditional football stadium, showing the beauty of Scotland.

In the afternoon we visited the Glasgow School of Art for the very first time where we were able to present in front of a brand new set of students.

It was a privilege to be shown some of the work they are doing on the largest 3D projection screen in the northern hemisphere. We were really impressed at the work going on for Scottish Heritage at their Stirling Castle site.

We’re now making the journey up to Stirling to prepare for the second day of the tour. Where we will be visiting Stirling, Edinburgh, Edinburgh Napier and Heriot-Watt.