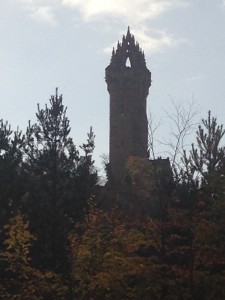 Another early start for day two of the tour. Bright and sunny but with a brisk Scottish chill in the air. Off to our first of four universities today, The University of Stirling. On the way to the university we caught a glimpse of the Wallace monument. What a great spectacle that overlooked the university grounds and we got another great view from the car park.

The talk at Stirling was a short one before we began the journey to Edinburgh for the day.

Taking a break from the tour we visited the home of the Grand Theft Auto series, Rockstar North. We had a good catch up and it was cool to see all the guys there, in what is a busy time for them before the big next gen console release for the popular Grand Theft Auto V. The work environment was fantastic, with Xbox’s in the office and pool/fusball tables, it really looks a great place to work.

Getting back to all things Grads in Games, our next talk was at the University of Edinburgh, presenting to the computer science students. Here we were joined by Caitlin Goodale, currently interning at Microsoft’s Lift London studio, returning to Scotland to speak about Microsoft’s internship programme and her experience as a 2D artist & mobile developer.

Next we moved on to Edinburgh Napier University, a really strong course with C++ taught since the first year. We learned from lecturer Kevin Chalmers that from last years graduates 3 moved on to PhD’s and 2 went to work with Rockstar North – great success stories!

We then moved on to our fourth and final talk of the day at Heriot-Watt University. We were joined by Richard Bangs and Matteo Meli of Boss Alien who came to speak to another keen group of students about why making games is awesome. For their first ever talk the guys did really well, helping them prepare for joining us at all the talks during the rest of the week.

We are now en route to Kinross to rest up and prepare for the 3rd day of the tour. A notable journey across the Forth Road Bridge, looking very impressive at the night, all lit up in lights.

Clocking up over 400 miles already, this first leg will be the longest in tour history!