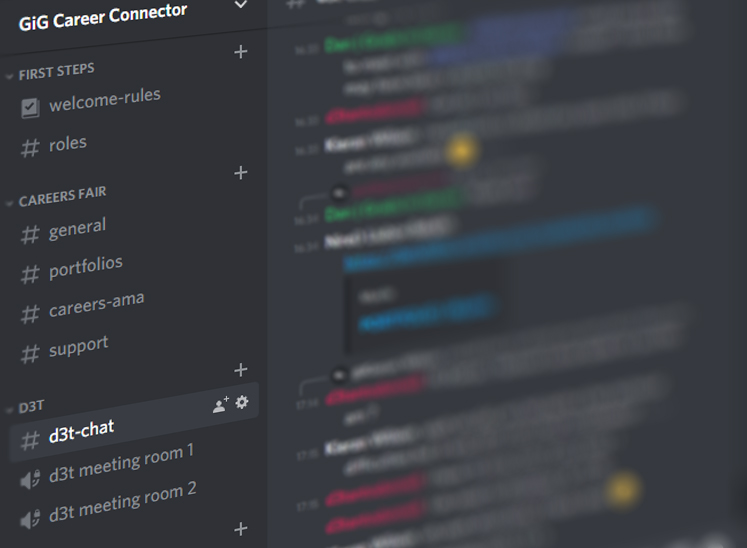 As part of this year’s Games Careers Week we trialled a new online careers fair format for Grads In Games, since we haven’t had a chance to run anything in-person over the past year.

In previous years, we’ve run a careers fair alongside our Grads In Games Student Conference and the Search For A Star finals day, so we knew the kind of things that people want out of it. Students typically want to learn more about each studio & the roles they’re hiring for, with a view to seeing if it’s somewhere they’d like to work.

With all of the changes to online formats over the past year, careers fairs are something that has seen a lot of experimentation trying to get to a format that works well both for the attendees and for the employers. We wanted to recreate the kind of experience you’d get at an in-person careers fair – a very casual and open environment that allows students and studios to have informal chats.

Career Connector was the format we went with, in part a ‘traditional’ careers fair setup moved to an online platform, with Discord channels replacing studio booths. Students and studios still had the opportunity for discussion and interaction, even if it many of the limitations we’ve all got used to over the past year. We also included a space for students to share and promote their portfolios, plus a dedicated game careers Q&A section staffed by the GiG team & with additional support from the studios on the day.

The key addition the Career Connector brings to the mix though is something we haven’t really seen at other online careers events – a meeting matchmaking system. It’s a common feature at larger industry gatherings, just not often utilised for careers events (where it can have just as much value).

Ahead of the event, students and studios go through a questionnaire that covers the basics of what they actually want to get out of the event and the type of people they want to speak to. We took all of these results and created a full day of scheduled private meetings where studios could speak to students that were actually relevant to their interests, and students got to speak to with the studios that were genuinely interested in hearing from them.

Overall response was very positive from both the studios and students we spoke to, with the system setting up a range of valuable conversations, some of which were continued long after the event had ended! As students graduate over the coming months I’m certain we’ll see several of those conversations leading to some first roles in the games industry, as we look forward to bringing Career Connector back again in future!

If you represent a games studio & would be interested in hearing about future careers events from Grads In Games, please contact andy@gradsingames.com for more info.