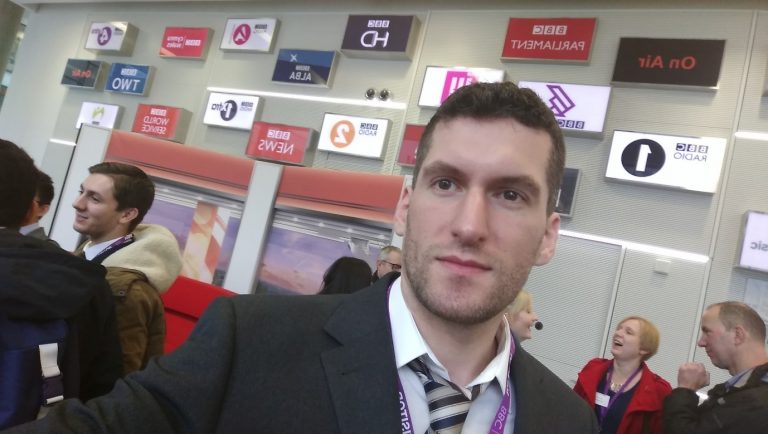 After scoring strongly in a C++ HackerRank test and impressing round two judges with his game, Cube Invasion (which can be played for free), Neil Osbaldeston, from the University of Central Lancashire, was invited to the Search For A Star Finals Day, where he met his soon to be employer, d3t.

“Search For A Star was a real eye opener for me. I had certain expectations of the competition: it would be tough, I’d have to work hard, but the effort would pay off, and I’m happy to say that it was completely worth it!” said Neil.

The work-for-hire software development and 2D/3D art service company based in Cheshire have worked for clients ranging from the BBC to Sony and SEGA, and are passionate about growing talent in the North West. Neil will be joining the team as he takes a year out from his degree to gain some valuable real world experience, and told us that d3t were the ideal studio for him due to their diverse portfolio of games.

“Neil was selected because of his fantastic academic record and demonstrable work ethic.” Said Technical Director of d3t, Andy Booth, “He’s always gone above and beyond in all his University work, exceled in our off-site technical test and proved a confident communicator and ambitious character during the interview stage.”

d3t joined a number of other studios during our programming finals day, including Playground Games, Sumo Digital, BossAlien and Red Kite Games, saying “We see Search For A Star as a great way of drawing attention to the most promising people.” and urged other studios to get involved in cultivating the young talent that this country produces.

“SFAS is a great opportunity for students to bolster their portfolios, developing something that allows them to express their creativity, and hopefully also get some experience in a technical-interview situation. The finals day is an awesome way to network and make some connections for the time when the job hunt is on!”

As for if Neil had any advice for next years’ students? “For anyone considering entering this prestigious competition and opportunity of a lifetime, all I can say is, be prepared to work hard and don’t be afraid to put yourself out there. The industry is interested in those with passion and drive to succeed and this is a great chance to show that!”

Congratulations to Neil, we’re glad that all your hard work paid off and we hope you have fun at d3t! We’re looking forward to writing about more success stories very soon!

Neil spoke to d3t about his new internship as an Intern Programmer.

“I met Andy Booth, d3t’s Technical Director, at the finals day of Search for a Star, and while a short conversation, I felt I gave a good impression as we discussed what d3t was about and what I wanted.”

You can read the full interview on the d3t site!