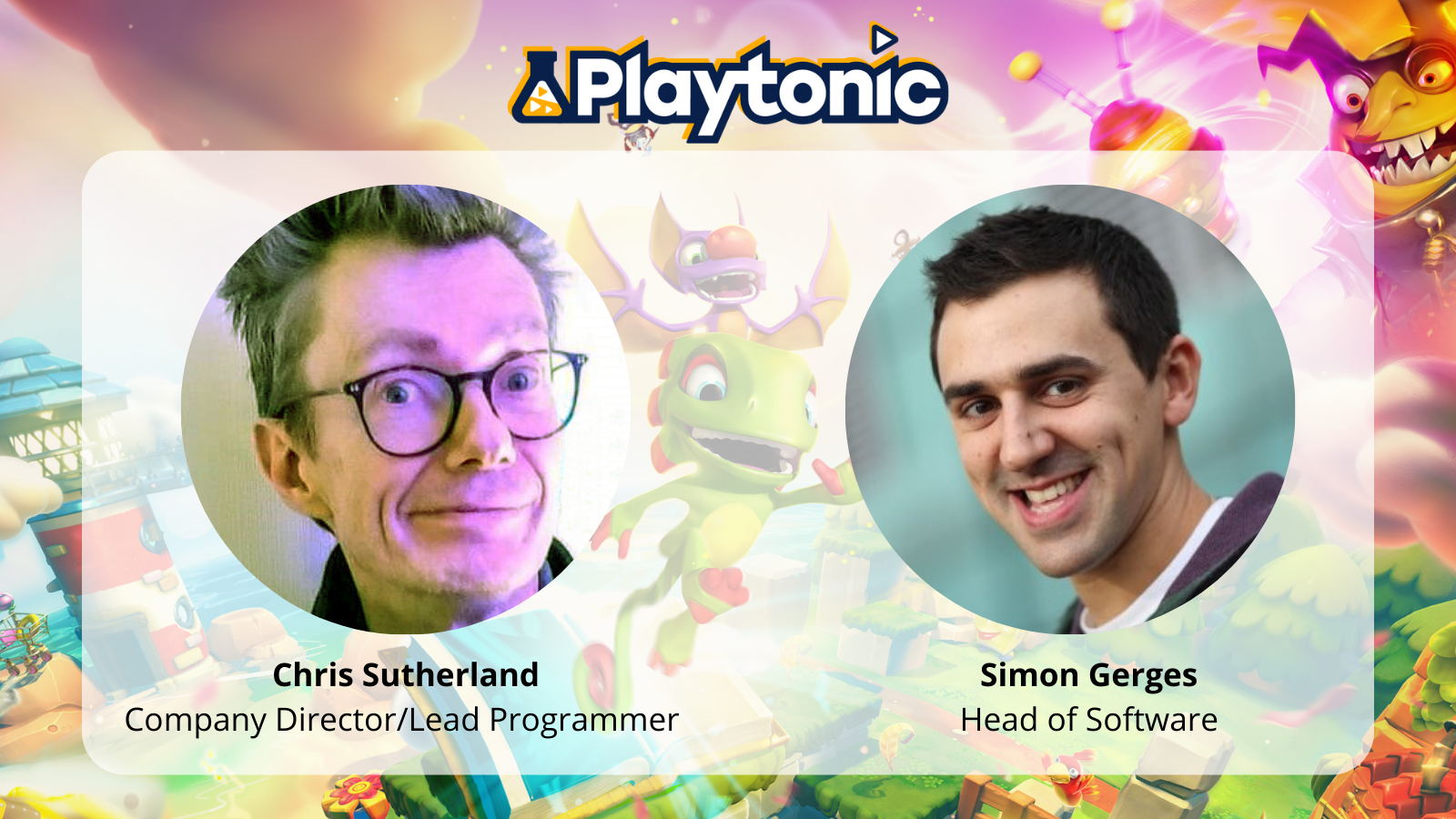 A couple of weeks ago the Grads in Games team went to meet with our partners at Playtonic – we sat down with Chris Sutherland (Company Director/Lead Programmer) and Simon Gerges (Head of Software) and discussed all things from collaborating with Grads in Games, what they look for in graduates and what brought them to working in the games industry.

Why did you want to partner with Grads in Games this year?

CS: Grads in Games means that students looking to find an employer can seek out potential employers earlier in the process, even in the year prior to their graduation. By looking earlier, this gives them more opportunity to get the best fit for where they start their career. For Playtonic, this works out well in a similar way; it enables us to make graduates aware of what we can offer them earlier in the process, rather than waiting for the big rush that happens as graduation approaches.

SG: We feel it’s important to hire graduates as regularly as possible, graduates are the next generation of game developers, and we feel it’s a responsibility of experienced developers to help bring them into the industry. We find they always have really positive attitude and are producing valuable work almost immediately. Grads in Games seem particularly well suited as a partner because they clearly care about helping both the students and feeding back to those who run games courses across the country.

Why do you think the Search For A Star game development challenges are good for students?

CS: Search for a Star gives students an early opportunity to catch the eye of potential employers by showcasing their skills and talent. In this way, entering SFAS gives future graduates a kind of ‘first mover’ advantage over other students. For us at Playtonic, when a student enters SFAS, it demonstrates to us they are a proactive individual and have great enthusiasm and interest in being in the games industry.

What can graduates learn about getting a job at Playtonic?

CS: In general, we look for people with a passion for games and games creation, along with an interest in developing and advancing within their chosen discipline.

SG: The people we look for in code are people passionate not just about being a game developer but being a games programmer specifically. They should be able to demonstrate good software engineering practice and a good foundation in 3D maths.

Why is Playtonic great place to work for those starting in the industry?

CS: We’ve got a great spread of experience – our teams are a mix ranging between more recent graduates and veterans who have been in the industry for 30+ years. Our experience has taught us that we don’t have all the answers which is why we look forward to the fresh thinking and insights that graduates can bring us.

SG: I think another great thing about Playtonic are the team sizes and the project length, they strike the right balance of producing things of quality, having a meaningful input to the project, and without spending too long in development.

You have now completed two games as a company, and I was just wondering what you are most proud of since Playtonic launched?

CS: It’s hard to pick one thing; it’s probably the overall progress we’ve made over a short time; we’ve started a studio, created two games and are now publishing games as well! And perhaps more importantly, we’ve all enjoyed the process each day of doing that!

SG: I’m particularly proud of the public and critical reception of our second game, Yooka-Laylee and the Impossible Lair. That and unlike Chris, it’s taken me a long time to finally release a game on a Nintendo console!

What pushed you to start Playtonic Friends?

CS: Since we started, we’d had contact from other developers who wanted assistance or advice in one form or another, and that was what seeded the idea really. It came about as an intent to help teams of the size that we were when we began, allowing them to focus on the areas they are best suited at.

What led you both to working in the game industry?

CS: I was playing lots of games on my ZX spectrum back in the Eighties, and I was tempted to go into the games industry. But I hesitated because I read some career’s advice saying it wasn’t a ‘proper’ career – so I then went to university for several years to learn Computer Science, thinking that I’d be less interested by the end of it. However, the opposite was true, and as I graduated, I really still wanted to be in the games industry! So, despite being recommended not to do that, that’s where I ended up, and I’ve not regretted it since!

SG: When I was younger, I had a huge passion for games but at the time it wasn’t really a career that anyone thought was possible to get into. But when I was choosing what to study at university, I came across a few computer graphics related courses, and it immediately became obvious that that is what I wanted to do, and fortunately I managed to make it happen.

Is there any media that you think has had an influence on you?

CS: Many of the games I enjoyed most on my ZX Spectrum were created by one company (which became Rare), so it made sense for me to apply there as a graduate and I ended up joining back in 1989.

SG: Actually, my story is very similar but a generation or so later than Chris, I was a huge fan of Rare’s games growing up and fortunately I landed my dream job with them straight out of uni.

If you could work on any game, what would it be?

SG: I’m interested to hear what [Chris] thinks because he’s worked on Donkey Kong and all sorts. Other people would say the IPs that he has worked on!

CS: That’s an interesting question because I’ve worked on so many different IPs over the years, such as with Donkey Kong Country, Banjo Kazooie, Viva Pinata, and then more recently Yooka-Laylee. But what’s most interesting for me are the exciting properties we have lined up for the future at Playtonic!

SG: That’s a good question – If I could work on any IP in the world, I think I’d probably work on a Nintendo one, either a Mario or Zelda game, but I feel we are making games in that guise here at Playtonic anyway!

What is the most fun about working at Playtonic?

CS: The thing I find most fun about working at Playtonic is that every day can be quite different from the next. You’re often working on quite a range of very different things, and everyone’s all working together to try and build something great.

SG: Agreed, because our team sizes are quite small, it means that the work that we do is much more varied and less specialized. So one week we can be working on one thing, and then the next week, we’ll be working on something completely different. But if we were in a much larger team, we wouldn’t get the chance to do that.

If you want to find out more about Playtonic Games you should head over to the Playtonic Games website  –  they have lots of exciting thing going on at their studio at the moment and if there’s any opportunities to get involved in we urge readers to have a look into this incredibly welcoming studio.

There are still opportunities for games studios across the world to take advantage of a partnership with Grads in Games for the 2021/22 academic year or for future activities. To see our partnership brochure and schedule an informal discussion please contact Andy Driver (Operations Manager) at andy@gradsingames.com

If you’re a student looking for an internship or graduate role in the games industry, we can help! We run multiple games careers events each year that help provide you with direct guidance to get a studio role. Plus, we also run student game dev challenges across programming, art, animation and VFX, specifically designed to showcase your skills in front of hundreds of studios across the UK and Europe.