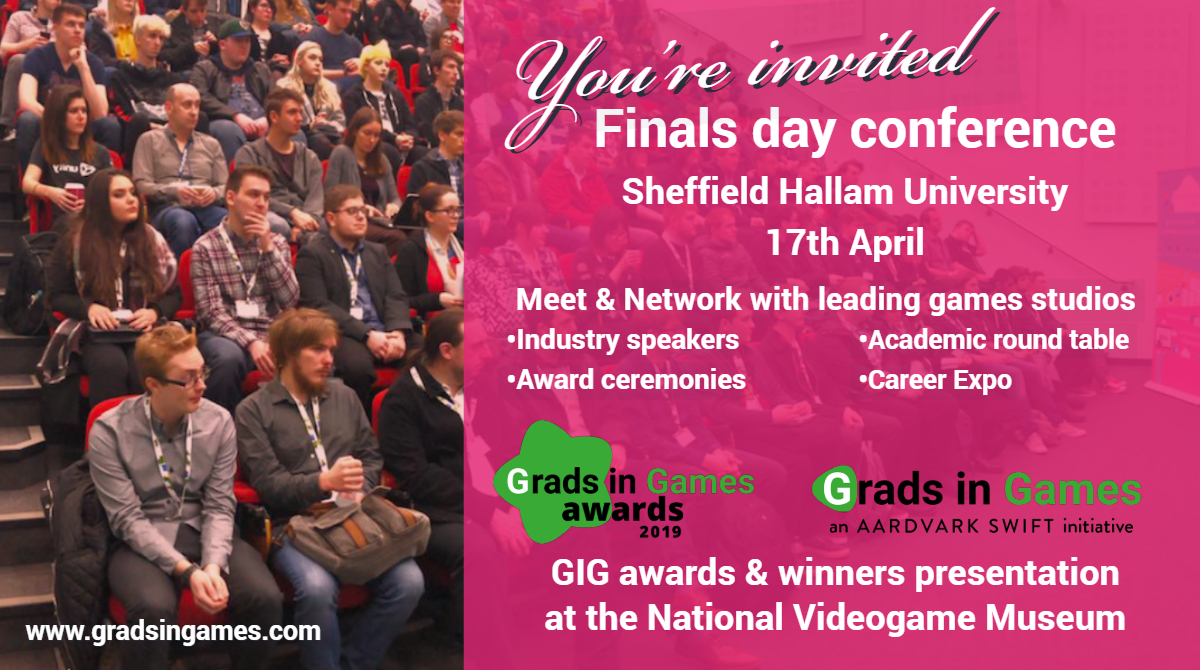 The Search for a Star, Sumo Digital Rising Star and Grads in Games awards are just around the corner!

On the 17th of April at the National Videogame Museum the winners of the awards will be announced. However, before the excitement of the Search for a Star and Grads in Games awards there is also the Finals Day Conference to look forward too, held this year at Sheffield Hallam University.

If the games industry is your dream job destination, then this conference is for you! Join us for one of the biggest student-focused games events in the UK.

The conference day takes place at Sheffield Hallam University Cantor Building and is the perfect opportunity to network with people from across the games industry. What better people to ask about getting into the competitive video games industry, than those who have already done it?

The day will be full of invaluable information and networking opportunities. From 9am on Wednesday April 17th 2019 there will be a full day of industry-led talks, Q&A sessions, careers expo, industry and academic roundtable discussions and networking sessions. All of this is designed to give you an insight into how the games industry works, how studios function, and what they want to see from you when it comes to applying to work in a games studio.

Representatives from international studios will be there, giving talks but also showcasing at the careers expo, which will give you plenty of opportunities to ask questions and generally chat to people you may end up working with in the future.

Studios who’ll be attending include:
Bulkhead Interactive, the studio behind the first-person puzzle game Turing Test, and 2018 fps Battalion 1944.
Software engineering company d3t who work on video games but also much-more besides.
UK-based VR studio nDreams, experts at working with new and exciting virtual reality technologies.
Sheffield-based game developers Sumo Digital who have worked on everything from Sonic Racing to Crackdown 3.
Brighton-based TT Odyssey who have worked on pretty much every Lego game you can think of.
And last but by no means least, Wargaming the creators of the incredibly successful World of Tanks.

This free event is a must-attend for any student who is looking to work in the games industry after graduation, or for anyone looking for placements during study. The industry experts and representatives from each studio are all there to talk to you about your future careers.

There’s no one-way to get into the games industry. It’s a competitive field, and this is a great opportunity to network with possible future colleagues and stand out from the crowd of other graduates vying for positions in game studios.

The awards ceremonies will take place at the National Videogame Museum, in the centre of Sheffield. From 5pm onwards the evening will consist of refreshments, networking and free reign of the museum. The evening’s main events are the Grads in Games Awards and the Search for a Star and Sumo Digital Rising Star awards.

The Search for a Star and Sumo Digital Rising Star 2019 awards are the highlight of the evening. For those who don’t know, these two competitions are two of the industry’s biggest student game development challenges. Finalists across five categories; Character Art, Environment Art, 3D Animation, Game VFX and Game Programming, will find out who has been named 2019’s winners.

Sharing the bill are the Grads in Games Awards which seek to reward the universities, academics, students and studios that have made an impact in improving the link between the games industry and education. The awards are designed to highlight the institutions that are going the extra mile in helping students make that leap from student games developer to professional games developer.

While the awards aren’t in progress, you will have free reign of the National Videogame Museum as well as plenty of opportunity for further networking. The museum has over 60 interactive exhibits, so that’s 60 different games that you are free to play on the evening of the awards!

If you’re a games student or games educator get your tickets here and Studio attendees can get their ticket here. We look forward to seeing you at the Finals Day Conference and Awards!